On Thursday night, October 3, 2019, Maple and I drove into New Milford, Connecticut, spent the night at the Rocky River Inn, and on the following morning drove north to Cornwall Bridge, where we hung out at the Country Store waiting for our taxi. The only shuttle we could find was the Pawling Taxi from New York. Our overworked driver got us to Hoyt Road, and we were on the trail by 9:20.

The rain of Thursday had been followed by a cold front, and the temperature had dropped a good twenty degrees. A chill was in the air, and it seemed that autumn had finally arrived. The leaves in Connecticut were changing color and were just beginning to fall from their trees. But we would have to watch out for the fallen acorns. Beware acorns! They are like marbles and will set your feet a-rolling out from underneath you. Karen and I were to slip numerous times during this trip, and Maple actually fell twice.

With just a few steps away from Hoyt Road, we were in Connecticut. We followed closely along the border until we got to Ten Mile River. Then, we followed the river north to its confluence with the much larger Housatonic. A bridge there allowed us to cross Ten Mile River and set us down on the southern bank of the Housatonic, which we walked along side of for about 1.5 miles, before coming to the border of Schaghticoke Reservation. This pushed us back toward and across the New York border, as we climbed our highest peak for this trip, Schaghticoke Mountain, a 1000-foot climb in three miles. 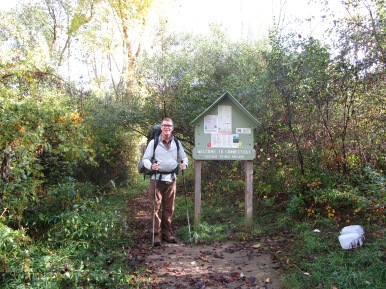 Maple and I hadn’t been exercising since our last AT outing, so by the time we reached Schaghticoke Mountain Campsite, at 8.3 miles, we were nearly exhausted. But it had been a particularly dry summer, and most of the water sources were dried up, including the source at the campsite. We pushed on. It was about this time that we ran into a flip-flop thru-hiker who was now SOBO, 140 miles from completing his trek. We wished him well, and inquired into the flow of Thayer Brook. One mile south of Mt. Algo Shelter, this brook was our last hope for water before making camp. We were assured that it was running, and indeed it was. Maple and I stopped there and filled up our dromedary.

It was 5:30 by the time we reached Mt. Algo Shelter. We were exhausted, but delighted to see that, although four tents were already up, there were still several tent sites available. By the time we set up camp and cooked our dinner, the light from the sky was quickly fading and the air was getting cold. During the night, the temperature would drop down into the mid-30s.

The reputation of St. John’s Ledges had preceded itself, and so, on Saturday, Maple and I measured our progress by how close we were getting to Caleb’s Peak and the beginning of this notoriously difficult descent. We arrived at about noon, and when we got there we found a group of day-hikers gathered at the top. They had just climbed up St. John’s Ledges, and part of the group had decided not to risk a descent. They were choosing rather to hike to the nearest road. The dubious consolation that the group included nurses and doctors was offered up as an incentive for them to make the descent, but they would have none of it. They were determined not to go back down.

Upon hearing this discussion, Maple and I both felt inclined to follow the cautious hikers to the road, two miles back. We walked up to what we presumed to be the beginning of the descent and looked down, and we could see neither path nor foothold. “How did you get up here?” I asked one of the group. “That’s the lookout, not the path. If you go that way, you are sure to hit hikers and climbers on your way down. The path is over this way.”

The path was, indeed, difficult, but at least it was not impossible. The key was to use hands and feet, and to keep three points of contact when descending step by step. It was more difficult than the Dragon’s Tooth, in Virginia, but not more so than certain parts of the White Mountains. Maple and I took our time, and before long we had completed the most treacherous section. Then, we came upon an REI-sponsored class of beginning mountain climbers, who were practicing on the sheer rock face of the mountain. One of them, a former thru-hiker, from back in the ’70s, talked with us briefly. It was clear that he had contracted a bit of nostalgia, for which there is no remedy but to get back on the trail. 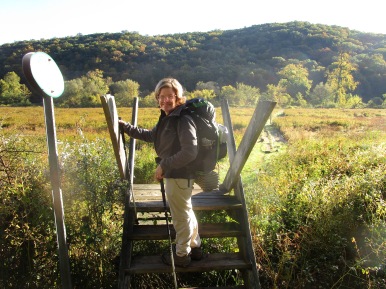 When we got to the bottom of the mountain, we found ourselves, once again, on the bank of the Housatonic River. We would follow this level path for three miles, passing by dry Stewart Hollow Brook Shelter. We stopped, instead, at Stony Brook, which had a decent flow and, up on the mountainside, several designated tent sites. All were unoccupied, and so we set up camp nearest to the brook and rested awhile before collecting our water for the night and next day.

On our final day, as we again walked along the southern edge of the Housatonic, we came across five white-tailed deer standing in the river. Upon seeing us, they darted across to the other side. Shortly thereafter, we came upon a couple of fly fishermen. The AT directed us away from the river and through a couple of open fields. Then, we had an 800-ft. ascent up Silver Hill. As we approached the top, the trail became increasingly rocky and even required a bit of scrambling. Fortunately, the way down, to CN-4 and our car, wasn’t quite so challenging.

Autumn in New England is lovely, and we shall soon forget neither this adventure nor its setting.