Birch and I woke up early on July 22 so that we would be on one of the first boats to cross Jenny Lake. This crossing was the best way to get to the Cascade Canyon trailhead and it had the added bonus of providng us with a beautiful view.

Cascade Canyon is one of the more popular day hikes in the park, but few people make it much past inspiration point, a spot that affords a nice view of Jenny Lake. We were on the trail by 8:15 am so it wasn’t crowded. The first mile or so was very steep, with a 1000 ft. ascent through a canopy of pines. The trail was wide and easy to navigate. Several times we had the chance to look down at Jenny Lake and we took our time going up the trail, stopping at spots to enjoy the cascading water and the river that roars through the canyon.

At the Jenny Lake boat dock.

I must say, Birch and I have finally found our trail legs. We are now used to the elevation and to carrying heavier packs. This made the ascent pretty easy and it wasn’t long before we were on a fairly flat trail. At one point we ran into a Park Ranger who warned us about the Marmots. Apparently, they like chewing trekking pole handles, backpack straps, and other things that taste salty.

At around 4.5 miles we reached the fork in the trail. We turned south to go on the “South Fork”. Finally, we were on the Teton Crest Trail! We began a steep incline and crossed several rapids/rivers. Luckily, the trail was in good shape. There was no snow and it was dry.

Immediately upon entering the camping zone we saw a great camp site. Without hesitation,we took it! We had amazing views of several peaks, including Grand Teton itself. The site was on a river that lived up to the “Cascade Canyon” name. As we looked out our tent, we could see a waterfall on one side, and the mountains on the other. We arrived pretty early (around 11:30 am) so there was plenty of time to relax.

At about 5 pm, a hiker named John and two of his friends joined us in camp. They had been on the trail many more days than us and John was carrying quite a load, including 40 ft. in rope, an ice axe and about 30 pounds of camera equipment. He told us that the rest of the South Fork was not to be missed. So, after dinner, Birch and I took a long hike (sans backpack!) up the trail. We took water and bear spray and went as far as we could while still being able to get back to camp before dark. The side trip was well worth it because we saw an enormous water fall that must have dropped thousands of feet down the side of a mountain.

Sunday morning was chilly! We had coffee and breakfast, then packed up and descended the South Fork until we came to the North Fork. This trail had many open expanses that enabled us to see for miles. The views were breath-taking! The trail is well maintained with stairs in many spots. Before long we encountered bolder fields. Then we saw snow! The snow was mostly off the trail until we got to within a mile of Lake Solitude. The last few yards up to the lake were snowy and icy.

We arrived at the lake just in time for lunch. What an amazing sight, to see so much snow and ice in July! The trail is not well marked so I can see why the park rangers were cautious about people backpacking in this area. Lake Solitude is at 9100 ft. in elevation and we would have had to go another 1300 ft or so in elevation to cross a pass under difficult conditions.

Fortunately, our plan was to camp on North Fork. We went back down the trail and found a spectacular site about halfway down the mountain. The camp had a nice stream for water. However, the best thing about it was that it had a large boulder/ledge with a fallen tree for seating. This had a view that was jaw-dropping. And we had it all to ourselves! Birch made coffee and be basked in the sun while enjoying our surroundings.Late that night we woke up to star gaze. I don’t think I’ve ever seen such a night sky! 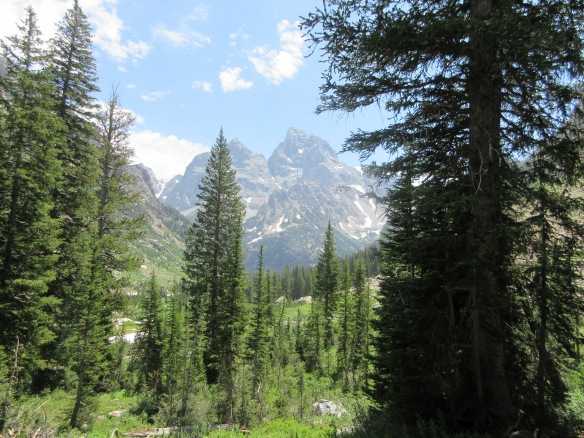 The view from our campsite.

The next morning was bitter sweet. This would be our last day on the mountain. As we descended, I took time to take enjoy my surroundings. Before long we were at the fork that brought us to the Cascade Canyon trail. The farther we descended, the more day hikers we saw. We were back at the boat before lunchtime. It was done all too soon!

Maple and I had planned to backpack the Teton Crest Trail since before we made our backcountry reservations in January, but a late June heavy snow made our plans all but impossible. Two Park Rangers in GTNP informed us that residual ice and snow made the higher passes treacherous and that hikers were turning back because they could not make out the path. The rangers suggested alternative routes.

The first such route that we managed to secure was an overnight in Death Canyon. Athough terribly disappointed, at first, in our change of plans, I must admit that this hike proved to be both challenging and rewarding.

Not having a 4-wheel drive vehicle, we had to park our car where the pavement ended and begin our backpacking venture a mile before the trail officially began.The trail, once begun, was uphill, and would remain uphill most of the way.

The only significant downhill was from Phelps Lake Overlook to where the Death Canyon Trail splits off from the Phelps Lake Trail. All told, we climbed 2,000 feet in elevation, despite the downhill section. Definitely, the hardest section is the ascent up to Death Canyon itself. Once inside the canyon, the ascent becomes more moderate until one reaches Fox Creek Pass, and we made our camp under Fox Creek Pass.

Maple and I crossed over water numerous times, usually on halved logs, that had their sawed, flat side facing up. Once, we had to take off our boots and socks, roll up our pants, and wade across the stream. Even the deepest water that we had to walk over was so clean that we could clearly see the bottom.

Death Canyon has nothing in common with Death Valley. In July, it is green, lush, filled with foliage and wild flowers. We saw many marmots. One, after we set up

camp, came quite close to us and checked out our gear. On the return trip, on the second day, we saw two moose, eating close to the trail. One surprised us as he crossed the trail 8 to 10 yards ahead of us.

Before we set up our camp, in the upper reaches of Death Canyon, it began to rain. Maple and I knew that we were approaching our chosen tent site, so we kept going. We were fortunate. No sooner had we set up our tent, than our gentle rain turned into a downpour, a thunder storm and a hail storm. An hour and a half later, the sun was out again, and we laid out our gear to dry. 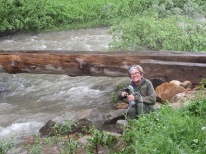 Death Canyon was awesome. Behind our camp was a racing stream, and in front of us were wide open spaces, with clusters of pine trees and boulders, hemmed in by tall cliffs, down which poured run-off from the snow. No other person was in sight, and it seemed that we had the whole canyon to ourselves.

Birch and I were eager to get back on the trail this Fourth of July weekend. We drove down from our home in Maryland – a 5 hour drive! Bubba shuttled us to our starting point at VA-606 and we were on the trail by 12:30 pm. This might be one of our latest starts but we had a very short 6+ mile hike to the shelter.

The hike began near Kimberling Creek, where we crossed a wobbly suspension bridge. At the other end we met a couple of backpackers who were hiking north. They were able to assure us that water was flowing at Jenny Knob Shelter. At this time of year you never know, so it was great news.

It was a hot, sticky day and it felt like we were in a rain forest. The trail winds around ravines and slowing ascends up to a ridge and Brushy Mountain. We hiked beside a stream that is listed as “unreliable” in the AWOL guide and that was a pretty good description. It was barely flowing.

It wasn’t long before we reached the shelter. We were a little surprised to find that we had it all to ourselves. Before long “Wolfgang”, a long section hiker from Germany, joined us. Wolfgang planned to hike from Georgia to New Jersey. He was about our age and was very philosophical about what hiking the trail really meant to him. We enjoyed his company.

By 7:30 am the next day we had completed breakfast, packed our tent, and were on the trail. Although the guide books make the hike look pretty flat it certainly didn’t feel that way. We seemed to be doing a lot more “up” than “down”! The ridge line was beautiful. As we approached Helveys Mill Shelter the woods switched from oaks and birch to pines. There were beautiful blooming rhododendrons too. The trail itself was very smooth and it was a pleasure to be able to look ahead and not have to watch our feet.

The only thing missing was…people. What a difference it makes to be out of the thru hiker bubble! Several miles into our hike a woman named “Maps” approached us going north and remarked that we were the only people she had seen all day. Likewise! “Maps” is a section hiker who has completed a lot of the trail. She was really impressive.

Once we got to Helveys Mill Shelter we had a choice. We could walk down to the shelter to camp and hike out the next day, or continue on another 2.2 miles to our car. It was just after noon and the shelter itself is .3 miles off the trail so the choice was easy. We continued on. After a quick descent we arrived at VA-612. We were really perplexed at our next move. Signage here is really needed! We walked about .8 miles along VA-612 until we came to our car at US-52, near Bland, VA. The big news is that we now have over 700 miles completed on the AT! Our next backpacking adventure will be very different. Look for our next blog to learn more! 🙂