By the time that Maple and I arrived at our starting point, it was already noon, and finding a parking space was difficult. After all, it was Memorial Day weekend, the sun was out after weeks of rain, and if other folks’ hiking-boots were at all like mine, they were itching to get back out on the trail.

The trail from Rockfish Gap to the Paul C. Wolfe Shelter, five miles southward, is about as smooth and as gentle as the A.T. ever is. It crosses half a dozen shallow creeks and springs, so water is plentiful. After several weeks of rain, the forest was looking a little like a rain-forest, the vegetation had become so abundant, lush, and green.

Ultimately, the trail becomes a series of downhill switchbacks, leading to the shelter and the rushing stream below. The Old Dominion Appalachian Trail Club has done excellent work here, building a series of stone steps at each turn of the switchbacks.

The setting of the shelter could not have been better chosen, and it was clearly a popular camping spot. Maple and I picked a tent-site just a few feet from the stream, amid trees, and by a fire-pit. Throughout the night, we could hear the water running past us. If I have any complaint—and I have none that would be sufficient to keep me from this shelter—-it would have to be the infestation of ticks. Maple and I pulled five off of us during the evening, and I found one embedded in my leg the following day. 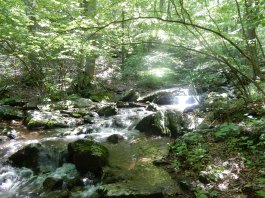 That next day was almost entirely uphill, but the switchbacks made the hiking less strenuous and consistent, if longer. We were never really sure when we got to the top of Humpback Mountain; at the top there was a gradual decreasing of ups and a gradual increase of downs, but no peak on which to hang our hats while we shouted our victory. 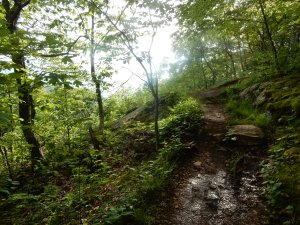 Although we had other hikers warn us about a cub and a rattler on the trail, we saw neither. What we did see was just how beautiful and majestic the Blue Ridge Mountains could be.

Now that it is early May, the foliage in Shenandoah National Park is finally starting to awaken. Birch and I were excited to get back on the trail. It has been ages since we’ve hiked in green foliage. 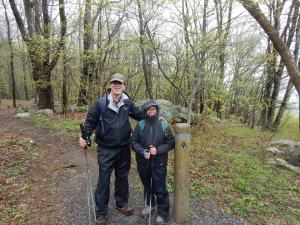 The weather in the area has been wet and cold. When we arrived at Fishers Gap it was foggy and raining. Not exactly the type of weather one would choose for a 10 mile hike. Still, we donned our rain gear and started off. The birds sang to their heart’s content, clearly unfazed by a little dampness. This, and the stunning green all around me, lifted my spirits so that I hardly noticed the weather.

The first part of the hike is a pretty gentle uphill climb. We had fun meandering around Big Meadows Campground and even got to see our tent. (We often stay there while hiking in the park.) By the time we reached Milam Gap, the rain had stopped. We cross the road continued up to Hazeltop, which is at about 3,800 feet. Despite being at a high 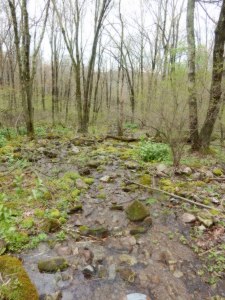 spot in the park, I can’t say that this is a hike with a lot of views. There are very few vistas. Instead, the real value is of this hike is taking in the beauty of the forest.

The trail in this section of the AT is remarkably smooth. It wasn’t until we got to Bearfence Mountain that things got rocky. We skipped the option of doing the rock scramble here (we’ve done that before!) and stuck to the AT. There are a series of switchbacks that takes one down the mountain before ascending once again to Lewis Mountain Campground.

Despite the weather, we completed this section feeling great. I’m so glad we didn’t let a few raindrops deter us!