Day One: VA-311 to Camp on Sawtooth Ridge

VA-311 to Pickle Branch Shelter is a strenuous 12.5 miles, particularly since it involves climbing Cove Mountain and Dragon’s Tooth. Maple and I decided to make the stretch a little easier by dividing it into two days, starting our hike on the same day that we drove out to our destination. When we arrived at the parking lot on Craig Creek Road after 2 p.m., 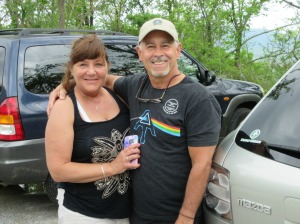 our shuttle driver, “Roub”—whose acquaintance we had made at Bryant Ridge Shelter—and his wife “Mama Roub,” were already there, waiting for us. They had very graciously offered to shuttle us, and they were wonderful company. On our way to our starting point on VA-311, they pointed out a popular dining spot among AT hikers, the Homeplace Restaurant, on Catawba Valley Dr. We hoped to go there after our hike—but, alas, it does not open until later in the afternoon. We’ll have to try again.

We knew that it was going to rain, but Maple and I had hoped to make it four miles before camping. That didn’t happen. After two miles, it began to sprinkle, and we found a great tent spot on the ridge. As it turned out, the rain did not begin in earnest for another hour, but by that time we had had coffee, had eaten our dinner, and were comfortable inside our tent.

In the morning, we awoke to find ourselves above the clouds. The sky had cleared, and it was promising to be a beautiful, though hot, day. We postponed breakfast and got back on

the trail by 7:30. Once we got off the ridge, in Catawba Valley, we found the trail muddy and slippery. At one point, a gathering of steers approached us and threatened to block our path. When we arrived at Catawba Creek, we found that the recent rains had made it deep. As there was no bridge, Maple and I had to remove our boots and roll up our pants before crossing. Once across, we rested at a tent spot and had our breakfast. 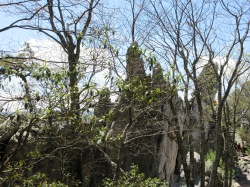 Route 624, Maple and I began our ascent up Cove Mountain. Half way up, the trail became quite rocky and began to demand a bit of scrambling. We were told, especially by those going down, that the scrambling would become increasingly difficult and dangerous, that our backpacks would make balancing precarious, and that I might have to use a rope to assist Maple on her ascent. Well, in truth, the scrambling did 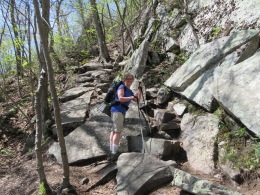 become more difficult, and Maple and I were both exhausted when we arrived at the top of Dragon’s Tooth, but the ascent was not half so difficult and dangerous as we had been led to believe. We actually made it more treacherous than it had to be, as we made the mistake of getting sidetracked by a false trail that led us up and over several rocks before disappearing

The combination of heat and physical exertion left us exhausted, and though we stopped for lunch shortly after leaving Dragon’s Tooth, Maple and I still found ourselves plodding along for the last 4.2 miles of our day’s journey. We stopped, probably, every twenty minutes, but eventually found ourselves going downhill toward the shelter. And, once at the shelter, a short but steep descent brought us to the plentiful and cold water of Pickles Branch. There we refilled and cooled off before setting up our tent.

Sharing the shelter with us was a small and pleasantly sociable group of students from Spring Arbor University, in Michigan, led by their teacher, the university’s Library Director, Robbie Bolton. They were enjoying the end-of-semester culmination of a one-credit course called Backpacking and Wilderness Experience. Like us, they were southbound, but there was a second group from SAU that was northbound and that we would cross paths with on the next day.

Our third day out promised to be another hot one, in the upper 80s. Having had to ration our water the day before, I decided to carry about 1.5 liters extra. We had a four-mile uphill stretch to get to the top of Brush Mountain, where there is a monument to WWII hero Audie Murphie. Surprisingly, there are also two park benches, probably built by the Roanoke ATC. 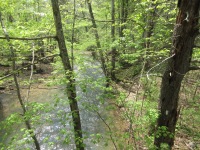 After three miles downhill, we finally crossed the swift and deep currents of Craig Creek and made it back to our car. What a rewarding adventure!

Day One: Troutville (US-11) to Lamberts Meadow Shelter

Birch and I continued our AT adventure by starting in Troutville and going south. I should mention that we’ve hit a real milestone on the trail. We’ve shifted from hiking the Appl LAY chian trail to hiking the Apple LATCH ian trail. We’re in the land of “ya’ll’ and it feels great!

Both Birch and I have new backpacks and so during the first few miles I was making adjustments to my back. The first part of the hike is pretty easy, but before long we passed over Tinker Creek (with a new bridge) and ascended about 800 feet to Tinker Ridge. The ridge reminded me of Pennsylvania. Beautiful views of Daleville to the right, and views of Carvin Cove Reservoir to the left. It appears as if there may have been a fire in the area not long ago, but life always seems to spring up from the ashes. 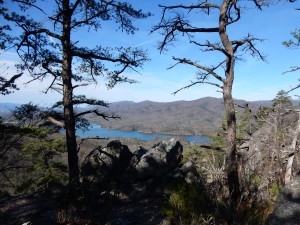 For the most part, this isn’t a strenuous hike. It wasn’t long before we reached Lamberts Meadow Campsite, situated along Sawmill Run. This is a great spot. It even has a bear box and a picnic table. Just up the hill was Lamberts Meadow Shelter, where we set up camp for the night close to the stream.

Being a Friday, we figured we were likely to have company. Sure enough, it wasn’t long before “Sam” came along. Sam recently defended his dissertation, and a hike along the three ridges was just the thing to blow off a little steam. This was his first time on the trail, but you never would have guessed. Soon we were joined by 10 members of the Tidewater Appalachian Trail Club and a ton of other folks. About 20 people in all!

Today was a short hike, so Birch and I took our time getting up. With 20 people elbowing for room at the picnic table, why not wait? This day’s hike was more strenuous. It started with an immediate 1,000 ft ascent to Tinker Cliffs. Many say that Tinker Cliffs is better than McAfee Knob, and I can see why. It has amazing views and it isn’t very crowded. The trail is very close to the edge of the cliffs, though!

As we descended we noticed evidence of horse traffic. We think there is a trail near Brickey’s Gap that may give some horse owners access to the trail. Brickey’s Gap must have been more populated at one point. We saw farm equipment that once served a purpose, but was long past its prime.

Eventually, we made it to Campbell Shelter, named after some dedicated Roanoke Appalachian Trail members from the 80s. Two father/son pairs joined us and we even saw Sam again for a while!

Birch and I were up early so that we could get to McAfee Knob before the crowds. We ate breakfast with “Found It”, a thru-hiker turned section-hiker. “Found it” got his name because he was always losing stuff – then finding it again. Sure enough, he lost his plastic baggies – then found them. It is always nice to see hikers who have earned their names. 🙂

As we neared McAfee Knob the anticipation was huge. I had seen so many pictures of this spot. Would it live up to its reputation? Sure enough, it was gorgeous. A few women were just about to leave, so we had someone there to take our picture. Then…the place was all ours! The sun was rising, the sky was bright blue, and we could see for miles. I’m so glad that we had a chance to experience this in peace.

The peace would not last long. As we descended we met tons of people – and dogs – coming the other way. One of the highlights of our trip was meeting up with Mr. Witcher again. He picked us up at 311 and dropped us off back at our starting point, where we left our car.