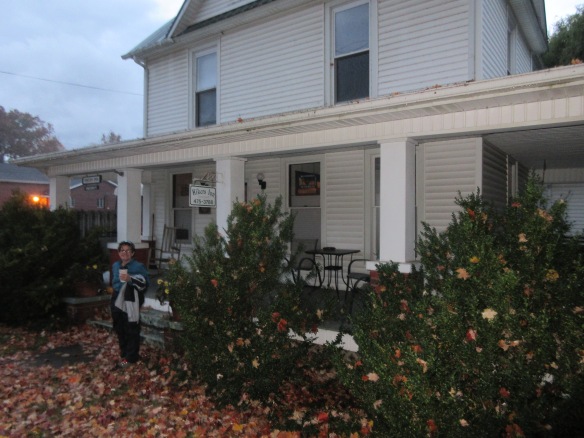 Maple and I spent the night in Demascus, VA, at The Hikers Inn, right off of the A.T. We had a beautiful bedroom, and the owners, Lee and Paul, were very hospitable and gracious, although, unfortunately, we only got to meet Paul. In the morning, we were up early and, after a five-minute walk from the inn, were at Mojos Trailside Cafe before it opened. We had a hearty breakfast, and were ready to get on the road.

Our shuttle driver, who would lead the way to the A.T. parking at VA-600 (Whitetop Road), was Matt, a local woodworking artist and avid bicyclist, who shuttles part-time for Mt. Rogers Outfitters. Matt’s a really nice man and well-informed about the local area.

We were on the trail, southbound, by 9:00. For the first several hours it rained—not too heavily, but just enough to keep us in our wet weather gear. In such weather, it is sometimes difficult to decide whether one gets wetter with the gear on, from perspiration, or with it off, from the rain. 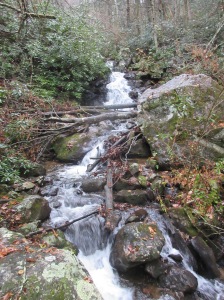 There was no shortage of water on the trail. We crossed over a dozen springs, creeks,and streams. Despite it being a Saturday, with temperatures in the 60s, there was a shortage of fellow hikers. We ran into only four in a ten-mile stretch, but at Old Orchard Shelter, we had the company of five other hikers, all northbound. We were all in tents, perhaps because the shelter is notorious for aggressive mice. One of the hikers that we met along our way this day told us that the mice had eaten more than half of his bandana.

Despite a little rain during the night, the second day of our journey was beautiful. No wet weather gear needed. After an oatmeal breakfast, we packed our gear, and were on our way. Originally, we had planned to make an easy day of it and hike only to Wise Shelter, 5.9 miles away, in Grayson Highlands State Park, but Maple persuaded me to make our third day the easy day and, instead, push on to Thomas Knob Shelter, 11 miles away. 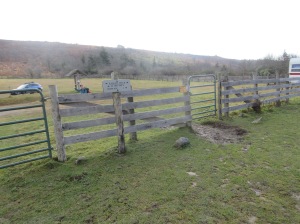 At one point, perhaps it was at a place called The Scales, we came upon a fenced-in area, in which were two trailers and a couple of cars. It appeared to be a private lot. Around it were signs giving directions to various trails. No sign gave any direction to the southbound A.T. Maple and I spent a half hour going one way, then another, then another, trying to find a white blaze. Finally, we gave up and decided to enter the gate of the private lot. Only then did we notice a faded white patch on the gate and a more distinct white blaze on the other side of the lot.

This way led us up Stone Mountain and to our first encounter of wild ponies. We would see many before the day was over. 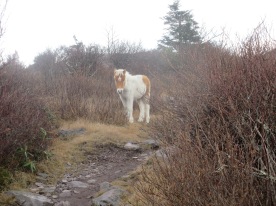 After over three hours of hiking, we began to wonder why we hadn’t yet reached Wise Shelter. Our pace seemed to be good, so we should have made it. (I should mention here that we didn’t have a map or any guide literature, since I had forgotten them at home.) We finally decided to take a break at Wilson Creek, at a nice tent spot. Afterwards, we discovered that we were less than 100 yards away from the shelter. Anyway, we took another, longer break at the shelter, had a nice hot lunch, and got back on the trail. By that time, we were behind schedule, so we refilled our water bottles at a nearby spring—just in case we didn’t make it to the next shelter before nightfall. 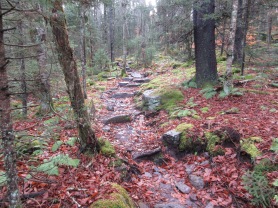 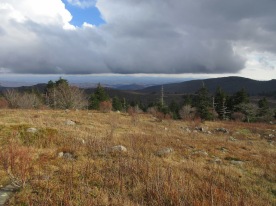 At Massie Gap, we encountered a northbound hiker who told us that Wilburn Ridge had taken a lot out of him. It was a fair warning, but hardly prepared us for just how difficult that climb would be. At one point, one has to squeeze oneself between two boulders to get through to the other side. This is also part of the trail up Mount Rogers. When we, finally, got over the ridge, we came to the Rhododendron Gap. Here were a number of fine looking tent spots. If there had been water here, Maple and I would have camped. Instead, we pressed on and soon arrived at our destination for the night, Thomas Knob Shelter.

When we awoke on day three, the wind was howling in the treetops, and the temperature had dropped significantly. “At least,” I said to Maple, “it’s not raining.” We started packing, and then it started raining. Soon, it was raining in earnest and would rain throughout the morning. Wet, windy, cold weather is not our favorite. We quickly donned our rain gear, completed packing up, and went over to the shelter to eat a fast breakfast.

While there, we met Steve, who had just summitted Mount Rogers and was on his way to Massie Gap. Steve told us of his mission to summit the highest points of every state, with the exception of Denali. He had completed a good number of them. Maple and I would come within half a mile of summitting Mount Rogers, but we decided, instead, to stay on the A.T. and to get back to our car as soon as possible—which we did within two hours.