Birch and I were shuttled to Elk Garden this morning, starting a three day backpack trip to Damascus. Throughout the week, the weather forecasts were dismal. Tons of rain! Thus, we were pleased to be able to start our ascent up White Mountain in dry weather. The trail leading up to White Mountain was very icy and – in some places – covered with snow. The crampons that we left in the car would have come in handy. Once on the top of the mountain we were quite pleased with ourselves because we assumed we had experienced the worst of the weather. Then….the wind! The area near Buzzard Rock was exposed to the elements and practically blew us over.

As we began the 200+ ft. descent we found the south side of the mountain to be warm and gorgeous. There were a few showers here and there but it wasn’t a challenge. The last mile before the shelter was not difficult but we have not hiked in 3 months so my body was complaining all the way.

Lost Mountain Shelter is huge. The water supply was great. It had a big overhang which sheltered us as the rain finally came. 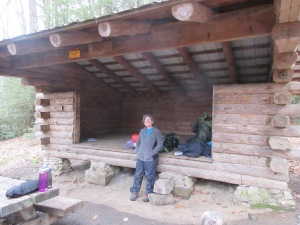 Wow! It poured last night! By morning it was drizzling. Birch and I made quick work of the first part of the trail but, once again, I complained about all the ascents. At times it was pouring but it was fairly warm out (for February) and we were sweating in no time. I’m not sure if the inside or the outside of my rain gear was more wet!

Saunders Shelter is 1/4 mile off the trail. It is not as big as Lost Mountain but well built, with a nice large overhang to protect us from the rain. By late afternoon it stopped raining and we slowly dried out. But it took a while! By the way, we have not seen a single person on the trail so far.  I guess the weather isn’t for everyone.

By our third day, it was drizzling just enough to convince us to wear our rain gear. Fortunately, we really didn’t need it. it was a cloudy and foggy day but relatively dry. A two mile, 1000 ft descent brought us near Whitetop Laurel Creek and the Creeper Trail, a nice bike trail that paralleled much of AT in the area. This is a beautiful area worthy of a day hike. The creek is beautiful. 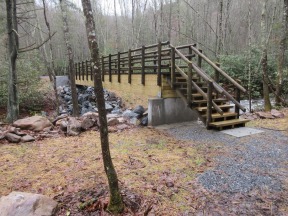 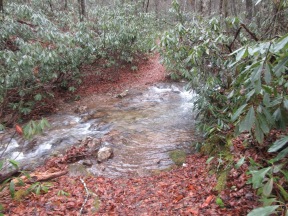 We were told that a brand new bridge opened near the Rt 58 crossing and so we were excited to be one of the first to use it. After crossing it and Rt 58 we were surprised to find a swollen creek that had water running well above the rocks. We were disappointed to realize that we were going to have to remove our boots, take off our rain pants, and hike up our pants in the cold weather. Birch crossed then realized that his boots were still on the other side. Thus, he had the joy of crossing three times.

We hiked up to Cuckoo Knob (about 700ft in 2.5 miles) then came down into Damascus. The Creeper Trail, the AT and Rt 58 all merged together for the last leg of our journey. How sweet it is, after 550+ miles in Virginia, to walk into the ultimate hiker town and the southern most part of Virginia!