After spending the night in a hotel in Secaucus, New Jersey, Maple and I made our way on Saturday morning, April 20, to the Elk Pen Hiker’s Lot on the outskirts of Harriman State Park, New York. The weather report had called for torrential rains, so we put on our rain gear and waited for Josie’s Shuttle. Soon, a man pulled up behind us, and announced that he was Josie. His voice didn’t match the Josie I had spoken with on the phone, but we got in anyway. His name turned out to be Richard, and he was a pleasant gentleman, who charged a very reasonable rate.

Richard dropped us off at NY-17A, and our hike began. Soon we reached the Pinnacles and, afterwards, Cat Rocks, both obstacles requiring scrambling over wet, slippery, and treacherous rocks. 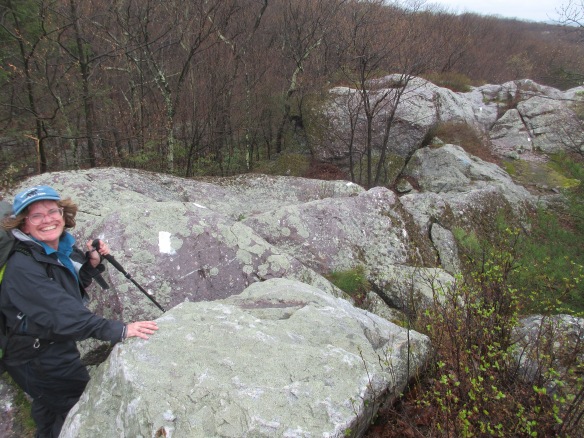 Maple and I took our time, as we knew we had all day to make it to Wildcat Shelter. Still, I slipped and landed hard on my butt. We both crab walked more than once down moss-covered inclines. We could see the blue (safe) trail that skirted around the Pinnacles and Cat Rocks, but Maple and I are committed to the white blazes. Is that rational? Probably not, but it lets us say with pride that we are AT purists.

Soon after Cat Rocks, we made it to the shelter. After getting out of our wet clothes, we prepared our lunch, made ourselves coffee, and then, . . . when it looked like the rain would hold off a bit, we set up our tent and took a nap. When we arose, the tent was soaking wet, and several other hikers had showed up.

We introduced ourselves and found that one young man was a trail runner, who had covered over 40 miles that day northbound. That stretched my imagination to the breaking point, since the terrain he had covered was far from smooth. There were bogs to navigate, rocks to scramble over, and brooks to cross. Even so, I see that Jennifer Pharr Davis, according to her 2008 Itinerary, achieved the same mileage over this territory. I’m simply amazed!

We arose early the following morning, Easter Sunday, and were the first to depart from the shelter. Soon, we reached Fitzgerald Falls, paused to take photos of this beautiful area, and then proceeded, crossing the stream twice over rocks. During the first 5 miles we made great time, covering 2 miles per hour. But then we ran into a series of mountains, each requiring cautious scrambling.

To slow us down even further, biting gnats were out in force, not only biting, but flying into our mouths, our eyes, our noses, and our ears. When we needed most to concentrate on our footing, they seemed most bent on distracting us. It was maddening! Maple was attacked relentlessly, and after our hike needed medical attention for the swelling that ensued.

Just beyond East Mombasha Rd., there is a stream that runs into Little Dam Lake. When we reached it, I had a few choice words to express myself, for there was no bridge to cross or rocks to traverse. Maple and I had no choice but to ford it, and we could not see the bottom. Just then, it started raining again. I figured we would get soaked anyway, so we might as well go in with boots and pants. Maple practically dived in to the challenge. Before she was across, I followed. I’m 5’10”, and the water was just up a ways from my crotch. It was up to Maple’s waist. I forgot that I had our camera in my pants pocket. It was ruined, but fortunately the photo card was salvageable.

Just for the record, there is a beautiful camping area on the north side of this stream. Maple and I were exhausted at this point, but pressed on.

Our next obstacle was Arden Mountain, from the top of which we could clearly see NY-17 and the Elk Pen Hiker’s Lot. The descent from this mountain was more difficult and treacherous than the ascent. Still, we made it down safely and back to our car.

Altogether, this was one of the more difficult AT sections that we have hiked. It was quite an adventure!