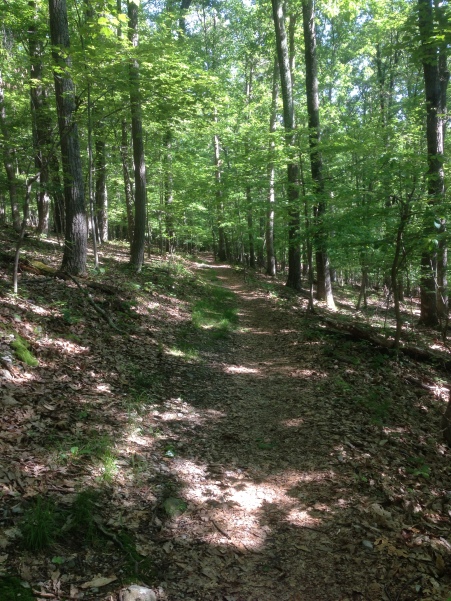 Having gotten up early at our Greenbrier campsite, Karen and I were eager to get started on our hike along the Big Red Trail. We brought along our map, but this proved entirely unnecessary, as the trails in Greenbrier are well marked; rarely is one forty feet beyond sight of a swatch.

We started on our hike at 8:45 and returned at 11:30, during which time we encountered three mountain-bikers, two joggers, and two fellow hikers—fewer people than one might expect, considering that the trail runs adjacent to the campgrounds. Just beyond the campgrounds, the Red and Orange trails skirt along the west of a small lake at which we saw a few men with their fishing lines in the water and one busy reeling in a catch. The forest bed aside the trail is covered, largely by leaves, fern, and fallen trees that lay moss-covered and rotting. 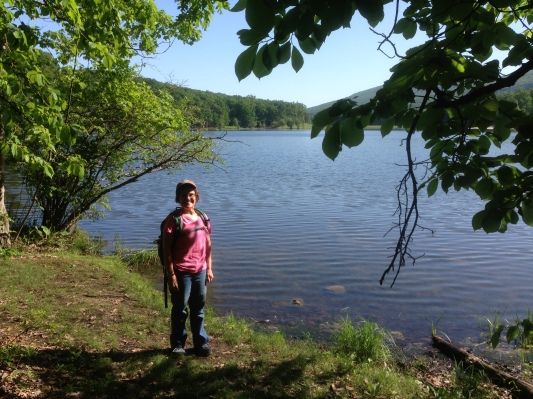 Perhaps, one reason for the scarcity of travelers on this path is that the trail, measured at 4.5 miles, is said to be “difficult” by the Park Service. For the most part, it is no more difficult than the trail that Karen and I hiked at Catoctin Mountain Park. In fact, generally, the trail is smoother and less encumbered by rocks—which is not to say that the trail is rockless; it’s quite rocky in a few places. Moreover, although there are two or three stretches with breath-taking altitude changes, the change is never over three hundred feet in a stretch, and for the most part the trail moves along with a gentle undulation. In places, the trail might be more accurately said to be “easy.”

The difficulty of the Big Red Trail is reached near the half-way point, when it crosses a creek. This point might be seen on the State Park map—which, by the way, is posted along the trail at every intersection, wherever one might be inclined to ask, “Now, which way?” Karen and I approached the creek walking westward, away from the lake. More often than not, rocks are strewn across the trail to keep it from becoming overworn and muddy, but we had reached a stretch in which the mud was unavoidable. Just past this stretch we reached the creek—ten feet across, with a current and depth that covered most of the rocks. Did we turn back? Did we retrace our steps to detour along the Blue Trail? Not at all. We steeled our nerves, removed our boots and socks, rolled up our pants to our knees, and negotiated the rocks as best we could. Trekking poles would have been useful in keeping balance. Even so, we met the challenge and soon placed it behind us! 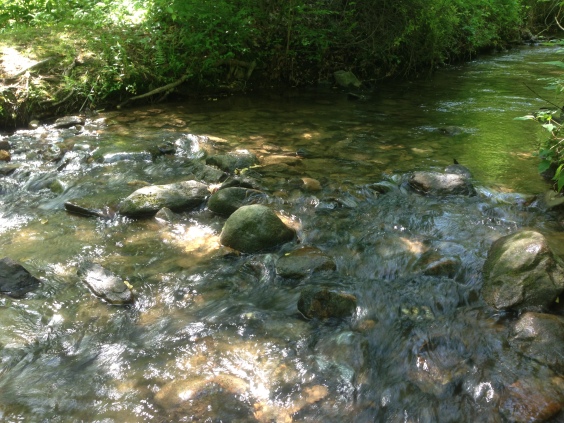 Don’t be discouraged by this obstacle! In hindsight, the problem of the creek made the hike more enjoyable and memorable. It distinguishes the Big Red Trail in my mind and makes me want to return—next time, bringing a hand towel.