On May 15th, Tod and I traveled to the Grand Canyon National Park, North Rim, to begin one of our “bucket list” hikes, a rim-to-rim of the Grand Canyon. We arrived on the South Rim on the 14th and on the morning of the 15th we hopped upon the first Trans Canyon Shuttle trip of the season. Our van included three other hikers, including a couple from Michigan and a man from Seattle who works for REI. It is a 4.5 hour trip that goes through Cameron and then through the Navajo Reservation. Beautiful! Our driver was a great tour guide.

The North Rim park is much smaller and more isolated than the South Rim. We had lunch, secured a cabin, and were just getting ready to go back to view the canyon when the power went out – and came back on – and went out again. A small panic set in since food service was impacted and we really wanted a decent meal before our morning decent. Luckily, the park sold us some cold sandwiches for dinner. By the time we awoke in the morning, we had power again.

A shuttle drove us to the trailhead at 5 am. It was still dark but the sun was beginning to rise and, as we hiked through the large pine trees, we soon came upon the canyon itself. The first part of the North Kaibab Trail was very steep, with lots of switchbacks and opportunities for gorgeous views. We quickly arrived at Coconino Overlook (.7 miles) then the Supai Tunnel. At 2.6 miles, and 2200 ft from the top, we arrived at Redwall Bridge. From here we had opportunities to hike along a trail that hugged the canyon and gave us views of waterfalls. My legs were wobbly and felt as limp as spaghetti but we soon arrived at Manzanita Rest Area and this gave us a chance to load up on water, take a bathroom break, and enjoy some snacks. We arrived well before 8 am and were making great time! Manzanita is 4.7 miles down and over 3800 feet from the top.

From here we followed the Bright Angel Creek on the North Kaibab Trail, passing the Cottonwood Campsite which did not yet have water available. Thankfully, it was relatively cool (low 80s). (Note: if you ever plan to camp here arrive early to get a site that is in the shade!) Then, we arrived at the Ribbon Falls turnoff hoping to take the side trail. Unfortunately, the bridge was closed due to damage and the water flow of the creek made it impossible to ford. After taking a break here we moved on and were at least able to see the falls from trail.

Both Tod and I were not looking forward to the “box”, an area of the trail that goes through a narrow section of the canyons and is supposed to be very hot and confining. As we trudged along I was getting super hot and tired and was wishing that we could avoid it. Luckily for us, we were actually in the “box” but didn’t realize it. Before we knew it, we arrived at a sign that said we were only 3/4 of a mile from the Bright Angel Campground. We soon arrived at Phantom Ranch, checked in, and had a couple of glasses of their famous lemonade before heading to set up our campsite. I was not able to really enjoy it, and I now realize that I had a bit of heat exhaustion due to a lack of salt in my system. That won’t happen again!

We found a tent site right by the Creek and set up. Soon the winds picked up and we scrambled to put rocks on each tent stake as well as huge boulders inside the tent. As the winds battered our tent we found that at least one of us had to stay inside the tent to keep it from flying away! Would this last the night? If so, we were in big trouble! Fortunately, the winds died down by around 8 pm and we were able to get some sleep.

The next day we were excited to have a full day to ourselves at the Ranch. We had a leisurely breakfast and enjoyed sitting in our camp chairs by the creek, watching the mules arrive and depart. We took a day hike along the River Trail and had a chance to enjoy lunch overlooking the silver bridge. We hung out at Phantom Ranch drinking lemonade, playing backgammon, and mailing postcards. In the afternoon we checked into our dorms – barracks that accommodated 10 women or men. My dorm included a woman from my hometown in Minnesota!

The highlight of any Ranch trip is the food. Tod and I ordered the stew dinners and they were awesome! You have no idea how good food tastes when you know it has been brought down by mule and you are among the select few who have been brave enough (or crazy enough?) to be there. Across from me was an alum from American University (where I work) and the waiter was from our town.

By 7:30 pm everyone in the dorm had come back from dinner and were ready for sleep. Crashed! It was the perfect example of how hikers might have energetic days but are totally wiped out by the end of the day. We got our wake up call at 4:30 am for the 5 am breakfast. All of us were up and ready for the day, excited to hike out of the Canyon.

Tod and I made quick work of getting to Indian Gardens, which is the camp area on the Bright Angel Trail that is about 5 miles from Phantom Ranch and 4.5 miles from the rim. We took a nice long break here so that we could eat snacks and top off with a bit of water before hiking up the last 3000+ feet in elevation. By now, the temps had begun to inch up, the crowds began to appear, and the sun came out. It seemd to take forever to get to the first rest house at “mile 3” (from the top). Then again at mile 1.5. We took plenty of stops and sometimes our fellow hikers passed us, sometimes we passed them. While it was slow going (slower than we would have liked, anyway) we finally made it to the top and to the Kolb house. We had completed a rim-to-rim!

In all, we were fortunate to have fairly good weather, plenty of food, and available water. Right after we left the north rim, the winds whipped up and they had snow. The South Rim had snow right after we left. However, it could have been just the opposite problem – heat. On a side note, throughout our trip, we were struck by the incredible number of “trail runners” on the trails. These are athletes who plan to hike the canyon in one day, and carry little but water and a few snacks. Some seem to have little knowledge of trail etiquette and many do not seem to be prepared for contingency situations like rain and snow. A rim-to-rim trip is an amazing experience! Be prepared for multiple scenarios and have fun!

On the morning of January 8, Karen and I awoke by the alarm set in our cabin at Phantom Ranch. We had opted for the late breakfast, scheduled for 7:00–scrambled eggs, bacon, pancakes, peach halves, with orange juice and coffee. Checkout was at 7:30, so after breakfast we hurried back to our cabin to retrieve our backpacks and set out on the trail.

As you leave Phantom Ranch, you find no sign pointing the way to the Bright Angel Trail. You must simply cross the bridge over Bright Angel Creek into the campground, and as soon as you do so, you’ll find yourself on the Bright Angel Trail, heading toward the silver bridge that crosses the Colorado River. On the other side of the river, you walk eastward along the river trail, which is very sandy in places.

Ultimately, the trail leaves the river behind and enters a gorge. Here you follow Garden Creek, crossing it half a dozen times. “The devil’s corkscrew” is a series of switchbacks by which you gain considerable elevation on your way out of the gorge onto the Tonto Plateau. Along Garden Creek, Karen and I met up with our two friends who were also on their way out of the canyon, Joe and Jack H. We were glad to have their company for a short while, but we insisted that they keep to their own faster pace. While walking along Garden Creek, one appreciates the fauna and the places where the rocks create little waterfalls. Here the Bright Angel Trail has its own beauty, though without the panoramic vistas of the S. Kaibab. 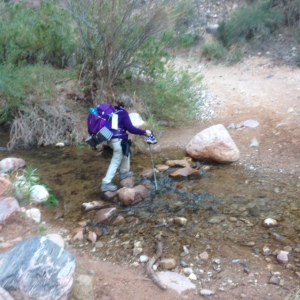 By about 11:00 we had reached Indian Gardens, and Karen and I had our lunch break. The sack lunch that we purchased from Phantom Ranch included a sliced bagel, cream cheese, strawberry jam, peanuts, pretzels, Craisins, Oreos, a beef summer sausage, and Vitalyte, an electrolyte replacement drink mix.

We had backcountry reservations to camp at Indian Gardens. In fact, we had been carrying much additional weight specifically for the purpose of camping here: I was carrying the tent and stove, Karen was carrying our food supply, and we were both carrying sleeping bags and liners and cold weather clothing intended to keep us warm through the remainder of the day and into the night. But we had not supposed that we would arrive at Indian Gardens so quickly and with energy to spare. Moreover, we felt especially cold at Indian Gardens, shielded (as it is) from the sun by canyon walls and cottonwood trees, and we dreaded encamping where our chief activity would be an effort to keep warm.  So, we deliberated and decided to hike the next four-and-a-half miles out of the canyon. Rather, dividing the trail by its rest stops, we decided to hike the three one-and-a-half-mile sections that would bring us to the top. (After all, anyone can hike one-and-a-half miles! We simply had to do that three times.)

The next mile and a half brought us to the three-mile rest stop. This seemed the longest mile and a half we had yet walked, and the increase in elevation had left us feeling exhausted. We took a break for about five to ten minutes and continued on. Yet, from here to the end of the hike I slipped into survival mode and took very few additional photos. All of my energy had to be reserved for the sole purpose of hiking. 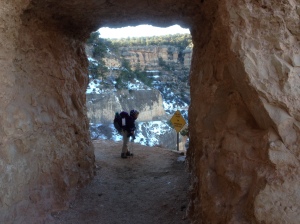 Karen and I took our time hiking those last three miles up through the constant switchbacks. There were times when I could not take more than ten steps without pausing for a minute. Karen too was exhausted. Finally, the Kolb Studio came into view, and we knew that we had made it to the top, having hiked the Bright Angel Trail in eight hours.