Maple and I were picked up by our shuttle driver, Dan of Trail Angels, at 11:30 at the Rattle River parking area—just south of Gorham. (Our plan was to hike all the way from US-3 to US-2. We had a twelve-day itinerary, but this was not to be. Dan told us that many people that he shuttles don’t make it as far as their intentions, and that we should contact him if we bail. We didn’t think that would apply to us, but we kept it in mind.)

From Franconia Notch, we had to walk through the woods a ways, on the Pemi Trail, before we crossed the bridge that leads directly to the Liberty Springs Trail, part of the AT. From the commencement of this trail, one has 2.6 miles uphill to the tentsite; however, the uphill doesn’t begin in earnest until one has to cross a creek. Then, one has 2 miles still to go, and it is the most strenuous 2 miles I think that I have ever experienced on the AT. Hiking southward up the Priest was definitely easier. The Liberty Springs Trail completely exhausted me. By the time we arrived at the tentsite, I was in no condition to safely backpack much further.

Ryan, the caretaker at Liberty Springs Tentsite, got us situated at platform number 9—and, as I write this at 8:10 in the evening—we have the platform to ourselves. We’ve had to store our food in a bearbox and do all of our cooking—including making coffee—at the cooking area. We filtered our water at a slow-moving spring close to the cooking area.

Maple and I are a bit discouraged by the hard hiking conditions and the time that it took us to make it up the mountain today. It is humid, and I was completely drenched in sweat by the time we got to the top. I think the humidity helped to drain me of energy. We’re committed to giving this hiking trip our best shot, and—if we can’t keep up with our itinerary, then we’ll bail out at Crawford Notch, but that would be a shame.

Birch and I were up at 5:30 a.m. to begin our day. The weather was gorgeous. After eating and breaking camp, we were on the trail by 7:20. We had a serious .4 miles hike to get up to a ridge. After a good night’s sleep, the first 2 miles weren’t too bad, but I was surprised not to see the open ridge that I was expecting.  Pretty soon we had a serious ascent. Franconia Ridge was spectacular but the photos make it look easy. In fact, it was exhausting.  We had a ton of scrambling to do – both up and down. By the half way point I wondered if we would make it! It turned out that the 2nd half was just as difficult. This trail was kicking our patooties!

Birch and I were in rough shape when we reached the shelter.  The good news was that the shelter was beautiful! It was huge. Everyone who arrived seemed to stay at the shelter instead of tenting, since rain was forecast for the night and next day. There were a lot of thru-hikers there who were super nice and were also complaining about the difficult hike.  It was encouraging to know that this really WAS tough. We slept well that night.

Despite a forecast of incoming rain, Maple and I awoke to a still-dry morning. We decided to get moving, so we prepared our coffee and oatmeal, packed up, and got on the trail by 7:00. Unfortunately, we were both under the impression that we had to go back up .2 miles (over steep boulders) to the top of Mt. Garfield to reconnect with the AT. Forty-five minutes later, we were back at the Garfield Ridge spring and ready to move forward.

Those first steps forward turned out to be down a waterfall. It’s strange what a person will become willing to do when the only alternative is an exhausting and humiliating retreat. Climbing down those wet boulders was precarious, to say the least.

Shortly, after the rain began to fall, we got into our raingear. Once again, I was to learn that I get just as soaked hiking in raingear than if I were to go without it—but for some reason, I find it so hard to forego putting it on when it begins to rain. Yet, not to pack it would be irresponsible.

After a difficult descent, followed by an exhausting ascent, we arrived at Galehead Hut, at about 11:30. The coffee (at $1 a cup) was cold and full of grinds, but the bean soup ($2 a bowl), which became available at noon, hit the spot. We bought Snickers for desert, then ventured back out into the rain.

Leaving Galehead Hut, we had a hard climb up South Twin Mountain. The remainder of the way to Mt. Guyot (pronounced Gee-oh) was not as rough, but was still exhausting. Mt. Guyot is in an alpine zone, covered with huge boulders, over which one must navigate, and it was eerily half-hidden with clouds.

At Mt. Guyot, we left the AT and travelled .8 miles on the Bondcliff Trail to Guyot Campsite and Shelter. Jacob, the caretaker, was happy to see us as we were, at 5:30, the first to arrive. 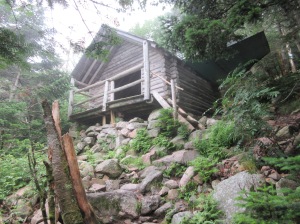 After setting up inside the shelter, which we were to share with “Mr. Maps” (who occupied the top level), we prepared our dinner, filtered our water, and prepared to settle in for the night. We were exhausted. It was then, as I went to retrieve our journal, to write my blog entry, that I got a muscle spasm in my left knee. I could not stand on my leg, bend it, or turn it without causing myself severe pain. Maple sought help for me and returned with Niko, a fellow hiker who was trained in first-aid. He counseled me on how to tend to it and advised that we wait till morning before making any decisions based on my condition. Maple applied a freezer-bag filled with spring water, and I took 1 gram of Ibuprofen to get me through the night.

(Miraculously, by morning, I was as good as new, and so we did not have to take the zero day that we had anticipated.)

Well, miracles do happen. Birch and I had planned to stay an extra day at Guyot for him to recuperate, but it turned out that it wasn’t necessary.  If you had seen the utter pain he was in the night before, you would have assumed that we were in big trouble. However, we were able to hike out of Guyot and we reached the boulder-covered peak in good time. Before long, the trail descended into the trees. Although rocky, it was our smoothest day yet.

We were at Zealand Hut in no time and had a chance to relax and have an amazing bowl of lentil soup, plus a Hershey bar. There were quite a few day hikers at the hut, which offers easy access to a waterfall and great views. We saw Mr. Maps again, too, who was pleasantly surprised to see that we had made it.

After an easy and short descent, the trail became amazingly flat.  The only downside in this section is that we had to go through a bog or swamp for the last few miles. We walked on plank upon plank to get to Ethan Pond.  Ethan “Pond” would be considered a lake in Minnesota. We set up our tent on a platform and enjoyed a long nap before having lasagna for dinner.

Overall, this hike was the easiest yet, even though it was 10 miles. We were exhausted, though.The Whites are beautiful but tough!

Lots of aches and pains this morning as we arose. But, after granola with peaches, we packed up and were off.

There were more puncheons at first, then the trail began a slow descent down hill. This is more like the AT that Maple and I knew before we experienced the Whites.

When we arrived at the parking area at Crawford Notch, the first thing I did was try my cell phone to call Garey’s Taxi Service of Littleton. I had talked to Garey in advance and had learned from him that we would have no trouble calling him from the notch, but—alas—no cell coverage, neither for us nor from any other people at the parking lot. Yet, to our good fortune, a fellow hiker that we had met at Ethan Pond offered us a lift into Littleton.

Littleton is a very nice little town, with great restaurants, a hiking store (Lahouts), and the Littleton Motel, “oldest motel in New Hampshire,” where we made plans to stay for two nights.

Here our trip ends. The trail has taken more of a toll on our bodies than we had anticipated. We’ll be saving the remainder of the Whites for another time.