Birch and I have been itching to get back on the AT so we decided to do a repeat of our very first backpacking trip, but in the opposite direction. This gave me a real opportunity to reflect on how far we’ve come (both literally and figuratively) since I first put a backpack on less than four years ago.

We started our day visiting Harpers Ferry and the Flip Flop Festival. My cousin, Lynn, works for the Appalachian Trail Conservancy and she was a great hostess. We were able to leave Gathland State Park and get on the trail by 11:30 am. The first part of the trail going north is a mild incline, but we haven’t been on the trail for a while so it felt pretty steep.

I had forgotten just how beautiful the Maryland section is. It is relatively flat, but with enough hills to keep things interesting. There are rocks, but the trail is usually wide and smooth. There are no leaves on the trees yet so we had a chance to enjoy the sunshine.

After about 7.5 miles we turned the corner to see Dahlgren Campground. For those who haven’t been there before but have spent time on the AT, this is a VERY unusual place. It has about 6 camp spots, each with its own picnic table and a tent platform. But the biggest deal is that there are regular bathrooms with running water and flush toilets. There is a large sink on the outside of the building to get water and wash dishes. I felt like we were cheating!

As with most of our hikes, the best part was meeting interesting people. Camping near us was a man named “Vinegar” who was retired and had section hiked the trail from Georgia to Maryland. His goal was to get to the Hudson River. Vinegar’s personality was anything but sour.  He might continue on the trail and there is a slight chance that we’ll meet him again along the way. I hope so.

Dahlgren had two sets of newly started flip floppers. Among them were a father-son team who had never backpacked before. This was their first night on the trail. I must say, it really reminded me of our first hike to Dahlgren. We had so many questions back then, and had so much to learn. Even little things, like figuring out how to use the bear pole.

After dinner it began to rain, as forecasted. However, we had one super power that made this all right.  A new tent! The REI Half Dome 2+ is huge. It has a big vestibule that made it possible to keep our backpack and other gear outside. It kept us nice and dry.

The temperatures dropped considerably overnight and we were thankful to have our down jacket to put on in the morning. After a delicious cup of coffee and a not-so-delicious bowl of oatmeal (I forgot the sugar) we packed up and were on our way. We passed the church and took a picture of Birch at the same spot we took a photo on our first backpack trip. We stopped by Washington Monument and then descended. On this trip, we noticed that there were a lot of freshly cut trees. Someone had done a lot of work to keep the trail clean.

Overall, we had a fabulous time. Being on the trail never gets old. 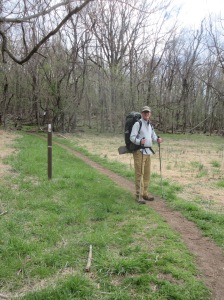 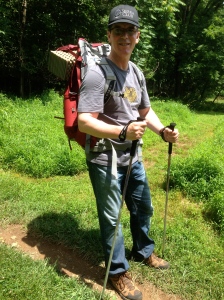 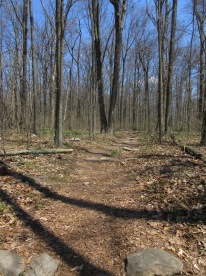 The trail going south was really wonderful. Compared to our recent hike, we found the trail to be wide and relatively free of rocks. We could actually look up every once in a while without losing our balance! I found myself zipping along with wide strides. Before we knew it, we had reached the Ed Garvey Shelter, named in honor of someone who was a devotee of the AT. Along the way, we found areas where we could veer off to look over a vista. However, this is best done in fall and winter when the trees have no leaves. A sign of the ease of the trail was the fact that we saw quite a few dogs on the trail. This section is very do-able for four-legged friends.

The trail is pretty flat, except for an area about halfway to our destination (about five miles in) that had some rocks and some elevation. Before long we were going downhill. We then reached the Weverton Cliffs, a beautiful place to sit for lunch while enjoying the view of the Potomac River and three states (Maryland, West Virginia and Virginia). 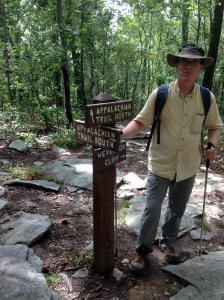 After that, the trail makes a steep turn down, zigging and zagging until we got to the bottom, crossed a road, and met up with a train. We were soon able to cross the railroad tracks and were on the C&O Canal.

Bikers flew by as we enjoyed the view of the canal to our right and the river to our left. After about 3 miles we were back to Harper’s Ferry. We crossed a bridge going over the river. It was kind of amusing to see so many tourists since this was still, technically, part of the AT.

Overall, we went 10.4 miles on the AT and then another +1 mile just to get back to the car. This was a fast-paced hike, even though it was one of our longer ones. Now we can say that we have hiked the entire Maryland portion of the AT. On to our next challenge! 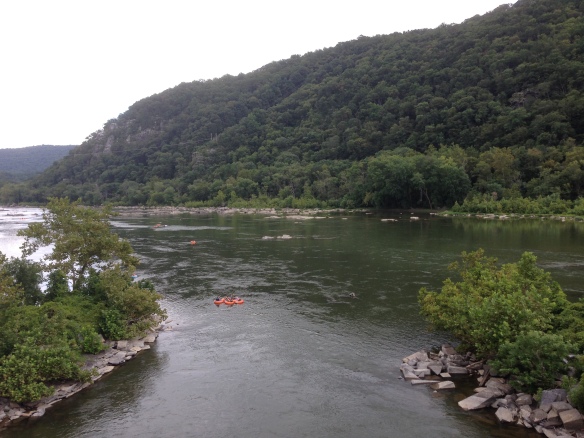