Karen and I began our hike Saturday morning at the southern end of Duncannon, where we had completed our hike a couple of weeks ago. We walked all the way down Market Street, then crossed over the confluence of the Juniata and Susquehanna Rivers. By the time we crossed over the railroad tracks and started up the real (i.e., rustic) A.T., we had already walked over a mile.

The climb up Peters Mountain isn’t as difficult as I had expected. The switchbacks made the ascent gradual, though not easy. There were plenty of rocks on the ascent to make the path interesting, but the real trial comes after the top of the mountain is reached. Then one has at least half a mile of scrambling over boulders. That slowed down our progress considerably.

The tree leaves prevented me from getting any great views of Duncannon from the ridge. But, after we had passed Clark’s Ferry Shelter, perhaps a mile farther, the view to the south suddenly opened us before us, and we got an excellent view of the winding Susquehanna River as it meanders its way toward Harrisburg. For the record, there is an excellent tent spot just about 20 feet from this outlook. 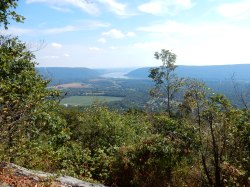 When we had about three miles farther to walk, Karen and I stopped for a coffee break. We took out our little stove, heated some water, and gave ourselves time to dry off while relaxing with a cup of hot coffee. I’m afraid this new routine of ours is going to become quite addictive.

This was a great little day hike of about 7.4 miles. The sky was clear and sunny, and the temperature was in the low 80s. Tomorrow we will pick up where we left off, and Karen will continue this blog.

Tod and I woke up early, ready to go for the longer, 9.6 hike.  We arrived at the trail head by 8 am. It was a crisp and cool fall morning! The trail was blanketed by leaves. It couldn’t mask the fact, however, that this is still rocky terrain.

Since we were already on the top of the ridge, this was a day with little altitude change. In two miles we were at Table Rock Overlook. If you don’t have vertigo, you can climb to the top rock and look down (way down!) to the sea of trees that cover the valley. What a view! Just a mile down the trail is Peter’s Mountain Shelter. It is the only shelter on the trail. We were surprised to see just how close it was to the trail and happy to see that there are places to put a tent. Although the official guide books make it sound like tent spots are non-existent, there seemed to be many unofficial (perhaps illegal?) tent spots along the way. 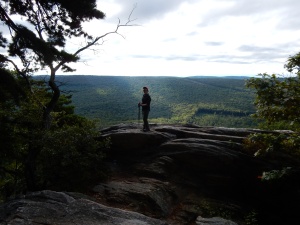 Hiking on a ridge is really nice. The breeze felt great and the rocks – except for a short stretch near mile 6 – were not nearly as bad as yesterday. Once again, we enjoyed a coffee break at a camping spot just off the path. After the junction for Shikelimy trail, the trail begins to descend.  It is a gentle incline with only a few very long switchbacks.

A view of the shelter from the trail.

Overall, this was a much easier, much faster hike than yesterday, even though today’s hike was longer. It just goes to show that one can’t always judge a hike by mileage or even altitude. Sometimes, what isn’t on the map matters!

This past weekend Karen and I continued our northward trek on the A.T., walking twenty-four miles in two days. Our hike the first day was very peculiar, in that we were in the woods only on the last three miles. Most of the hike was across a semi-rural landscape cut into tiny sections by many roads and highways. As often as we were among trees, we were also in farmlands, meadows, and on the side of roadways. And, during the first three miles, we could hear the noise of an active firing range, next to which the A.T. passes. 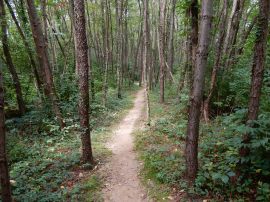 At about eight miles into our hike, we crossed the Bernhisel Bridge and had our lunch break at the Scott Farm Trail Work Center. There is a pump here for water, which we were entirely depending on, since we didn’t want to have to carry extra water all the way from PA-74. At first we were both perplexed and not a little disconcerted, since pumping produced no water. We had almost decided to knock on someone’s door, when we discovered that one has to lift and hold the pump in an upward position in order to get water from it. Yeah, . . . I know: “Duh!” Well, you live and learn.

About two miles north of the Farm we began our ascent up Blue Mountain. Having already walked ten miles, this last stretch before reaching Darlington Shelter was tough. But, it was worth it. Darlington Shelter is a beautiful rest stop. Although we probably already had enough water, Karen checked out the spring and found it slowly productive. I should also note that Darlington Shelter has the Taj Mahaj of privies, an impressive two-seater about as large as the shelter itself. We found a smooth and flat spot to set up our tent, cooked dinner, and made it an early night. 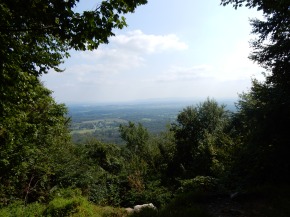 Setting up at Darlington Shelter

Upon rising in the morning, we found that two other hikers, Megan and her younger sister, Ann Marie, with their German shepherd, had come into the shelter during the night. They are, like us, hiking the trail a little section at a time. Megan’s boots had fallen into pieces, so Karen gave her some duct tape. What a nightmare! What could be worse on a hike than losing the use of one’s boots! Megan, however, wasn’t anywhere near despair. She taped her soles onto her socks and, without so much as a whimper, prepared herself to hike out—which, we are informed, she did successfully.

Our hike the second day was, until we got to Duncannon, almost entirely in the woods. We did cross a couple of fields between Blue and Cove Mountains. Cove Mountain, they say, is where Rocksylvania begins for north-bound hikers. The rocks weren’t worse than we’d experienced elsewhere; the problem was that there was no end to them. Karen and I took a short break at the junction to Cove Mountain Shelter and, then, pressed onward to Hawk Rock, where we had our lunch. From here, the view of the Susquehanna River and Duncannon is fantastic. 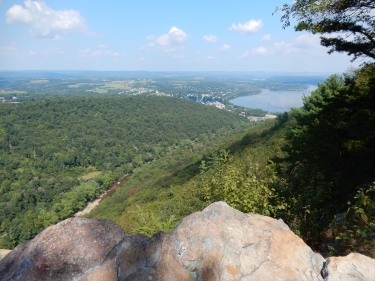 From Hawk Rock, down we went, steeply and treacherously. The larger rocks have been placed as steps, which makes the descent much easier, but one still must be very careful. When we got near to the bottom, the A.T. suddenly veers off and upward to the right. It’s counter-intuitive, and we had to look closely at our map to make certain that we weren’t foolishly following white blazes made by a self-amusing demon. To continue going straight and downward will probably take one to a parking lot, from which one could probably find one’s way into Duncannon—but, it’s not the A.T.

Twenty-four miles is a bit longer than Karen and I are accustomed to, and our legs were a little sorer than usual, but it’s a good soreness, one that we are proud to have earned. Having finally made it to Duncannon, we can’t wait to go further.