We awoke at 5:00 on Saturday, May 5, expecting rain, but finding that the forecast had delayed rain until 1:00. We hustled out of our home with two cars, parked one at our destination at Pen Mar Park, and then retreated to our beginning point where the AT crosses I-70 near Greenbrier State Park.

The first flip-floppers that we met were Kool and Kats (pictured ahead of us on the trail), who had spent the night at Pine Knob Shelter, close to I-70. Having just begun their hike at Harper’s Ferry, they were full of determination. “Where are you hiking to tonight?” Maple asked. “Maine” was the answer. “I hope you are planning to spend the night a little closer than Maine,” Maple delicately responded. “Maine” was again the retort. “We have to keep our sights on our destination,” was their explanation.

We would leap-frog with them several times during the day, as we and they rested. When they shared with us that their destination was Raven Rock Shelter, my first response was, “That shelter was dismantled two years ago,” but then—upon checking AWOL’s guidebook, it confirmed that the shelter was still there. As it turned out, the old Raven Rock Shelter was, indeed, dismantled and moved to the new AT museum to be opened at Damascus, VA., but a new, two-level shelter has been erected in its place.

I should mention one other thru-hiker that we met at the creek a mile south of Ensign Cowall Shelter. “How are you doing?” Maple innocently asked. “That’s just one question that everybody asks out here: ‘What does your pack weigh? How much food are you carrying? How are you doing?’ Let me tell you, when you are on the CDT, there’s nobody to bother you for days on end.” I laughed, and Maple persevered, “Where are you headed to tonight?” “That’s another question that people ask. I’m going as far as I’m going.” “Fair enough,” Maple responded, “What’s your trail name?” “Well,” said this stranger, “I’m not going to tell you. What does it matter?”

Maple and I filled our dromedary at the creek, and proceeded to Ensign Cowall Shelter, 8.6 miles into our hike. We were eager to set up our tent before the rain began. And surely enough, once we were set up and had introduced ourselves to those at the shelter, the rain set in—not to stop until about 4 a.m. We moved our cooking equipment and food in order to prepare our dinner at the picnic table under the overhang of the shelter. There were a couple of other flip-floppers there, one extremely talkative older man who just loved to hang out at shelters, and—later—one father with his two children, aged eight and ten, who were hiking 20+ miles a day and deciding whether or not to hike the whole AT.

At 5:00 the following morning, it stopped raining. Maple and I got up as soon as there was daylight, packed up our wet tent, prepared oatmeal for breakfast, and were on our way two hours later. We had a couple of engorged streams to cross that posed a bit of a risk and got our boots wet, and two and a half hours later we arrived at the new Raven Rock Shelter. The wood was new and beautiful, but the interior had been irreparably scarred by someone with an alcohol-burning stove. What a shame!

Just before we got to Raven Rock Shelter we met the sullen man we had the privilege of meeting the day before. “Hi! How you doin’,” Maple asked. The mysterious stranger mumbled something under his breath, and we passed on by. I think that this man was the most unfriendly person we have ever met on the AT. The AT is an especially social trail. It intersects with towns at so many places that you cannot reasonably expect to hike an entire day without meeting people. This sometimes happens, but it is rare. Maple and I have met the most friendly people on this planet on the AT. They are people who not only expect to meet other people, but who look forward to it. There are even people on the trail who do not hike it, but who are on it with the sole purpose of offering “trail magic”—that is, food, drink, transportation into town, or some other kindness to those who are hiking the trail. For many people, hiking the AT has been a way of renewing their faith in humanity, because of all the many kindnesses that they receive upon their way. So, this unfriendly person was an anomaly, a rare species, and because he was so rare I thought I should mention him. 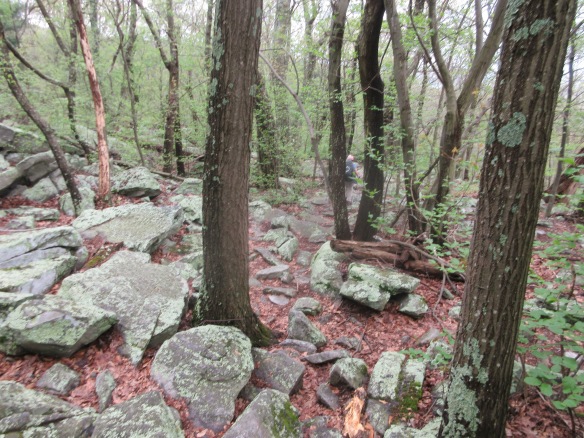 But, moving on, Maple and I came to High Rock, where we had to descend rock and boulder after rock and boulder for 650 feet. We had to be quite careful not to slip upon the wet rocks and tree roots along our path. When we got to the bottom and had 2 miles yet to go, the rain commenced again. Maple and I donned our rain gear. We could have complained, but we were grateful to have made it so far without it raining. Soon, we were in our car; we turned up the heat, got out of our wet clothes and into dry ones, and were on our way back home.