This past weekend Maple and I continued our southward journey on the AT in Virginia, hiking 20.1 miles, beginning at VA-43, east of Buchanan, and ending in the town of Troutville. Once again, we relied upon a shuttle service provided by Homer Witcher, who is the supervisor of all the shelters under the care of the Roanoke A.T.C. He dropped us off at our beginning point at 10 a.m. on a beautiful, but cold, Saturday morning. The temperature reached up into the 40s in the late afternoon, but with the constant wind, it rarely seemed much above freezing. A beautiful day for hiking, if dressed appropriately. And we were.

We crossed the Blue Ridge Parkway several times on Saturday, and the trail stayed fairly close to it always, until we reached Taylor Mountain Overlook. Here, after having our lunch, we crossed the parkway one last time, westward, and then parted ways with it. From here it was another 2.8 miles to Wilson Creek Shelter, where we were to spend the night.

We knew that Wilson Creek, an abundant water source, was a half mile south of the shelter, and since we weren’t looking forward to adding a mile to our hike (back and forth from the shelter), we took advantage of what appeared to be a small spring that crossed the trail about a quarter mile north of our destination. We filled our dromedary, continued our hike, and arrived at Wilson Creek Shelter before 4 p.m.

Seven young people had arrived before us. Among them were four north-bound thru-hikers, the first that we have come across this year: Hot Rod, Alpine, Sub-Zero, and his partner, Golightly. They had begun their journey in January and were presently accompanied by several college friends on spring break from Illinois–friends who were getting a taste of the backpacking life. At dusk, Maple accepted their invitation to make smores. They were all quite friendly, and it was a real pleasure to get acquainted with them. My only real concern is for Alpine, who has made it a habit to hike at night using his headlamp. Already he has had several falls, and I fear that it is only a matter of time before he injures himself.

Maple and I retired with the sun, played a game of backgammon, and then slept well, bundled up in our long underwear and sleeping bags with liners. When the Sunday morning sun woke us up, we made our breakfast of oatmeal and coffee on the picnic table in front of the shelter. When we packed up, we forgot our sporks on the table. It was an oversight we wouldn’t discover until we stopped for lunch at Fullhardt Knob Shelter. Eating Lipton’s Cup-a-Soup noodles with our fingers reminded us of our dinner along the “Roller Coaster” in northern Virginia, when I had forgotten to pack our sporks, and we had to manage macaroni and cheese with our fingers. 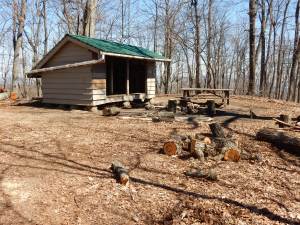 Fullhardt Knob Shelter has a cistern from which we were able to filter water. We had planned to spend Sunday night here, but we had made good time, despite the thousand-foot elevation gain between Curry Creek and Fullhardt Knob. And, since we didn’t have sporks with which to eat dinner and breakfast, we decided to hike the remaining 3.8 miles to our parked car on US-11.  Interestingly, after descending from the shelter, we had to pass through some privately owned land, including a cow pasture and a grass covered hillside, which is very steep and not represented on the AT map.