This past weekend Karen and I hiked the second half of our intended trek last month, when we were forced by heat exhaustion to terminate our planned three-day hike at Ashby Gap. The temperature this time was up to 93 degrees—still hot, but not the 100 degree heat index we were up against last month, and what a huge difference a few degrees can make, especially when the humidity is much lower!

The trail from Ashby Gap to Dick’s Dome Shelter begins with a long, steady ascent. Then the trail passes through meadows, where the tall grass along the path is cut by the Potomac Appalachian Trail Club. We saw volunteers hard at work. 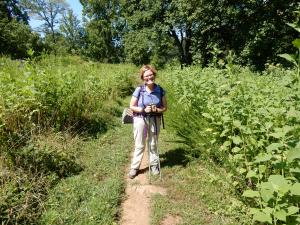 Our plan was to hike the first day only as far as Dick’s Dome, but we hiked the 4.8 miles in two-and-a-half hours, and as the time of our arrival was still early and there was no one and nothing to do at Dick’s Dome (which, by the way, had little to recommend it), we decided to hike 5 more miles to Manassas Shelter.

We kept up our pace and arrived at this second shelter with still plenty of light left in the day in which to set up, do our cooking, clean up, and relax. We felt that we had sufficient energy left to complete our trek and make it all the way to Manassas Gap (which was only another two miles away), but instead we kept to our plan of camping out one night.

We found Manassas Shelter to be preferable to Dick’s Dome. At Manassas there are four tent sites, all fairly level, the shelter itself is much larger, and—what makes a huge difference—there is a spring producing cold, clear water. At Dick’s Dome there is a shallow stream, but the quality of the water is questionable.

All-in-all, it was a very pleasant hike. Afterwards, since we were in the area, we spent a night camping out at Big Meadows, in our much loved Shenandoah National Park. Since we have hiked the A.T. as far south as Chester Gap (Front Royal), our future 100 miles on the A.T. in Virginia will be all in Shenandoah.