On June 11, our second hiking day at Shanandoah National Park, Karen and I decided to hike the Corbin Cabin Cutoff Trail to the eponymous relic, now maintained by the PATC, and from there take the Nicholson Hollow Trail back up to Skyline Drive, cross over to the Appalachian Trail, and take that north to return to the parking lot at mile 37.9. The entire trek would take us only 4.2 miles.

Compared to the Doyle Falls Trail, the Corbin Cabin Cutoff Trail is not as well defined. There were patches of grass growing on the narrow trail, which told us immediately that we were not on one of the more popular paths. In fact, we saw no one on our way down to the cabin. The first quarter mile of the trail is enclosed on both sides by white-flowered bushes. Further down, we encountered a black snake on the path.

Upon crossing Hughes River–which, I should add, is easily done, as there are large stones marking a path across what is really only a ravine–one immediately comes upon the log cabin built by George Corbin in 1909. It was locked up, but some bees appeared to have made a home in the roof. Karen and I had our lunch sitting on the front porch. 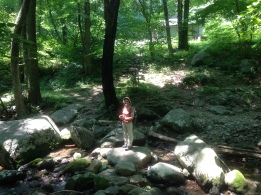 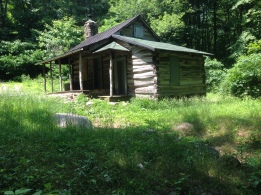 We had hardly begun our trek again when we spied the John T. Nicholson cabin on the opposite side of Hughes River. In Nicholson Hollow, before we began our ascent, we also caught sight of a large owl flying from one tree to another. Perched again upon a limb, it looked back at us, and then flew further on. Once we began our ascent, our movement frightened off a black bear, which scampered up the hill, away from us. All in all, it proved to be a great hike for spotting wildlife, as well as getting a little exercise. In the Falcon Guide to Hiking Shenandoah, the difficulty level of this hike is rated as moderate to strenuous.