Fall is such a wonderful time of the year to hike! This past weekend Tod and I experienced the West Virginia portion of the Appalachian Trail. We began at Snicker’s Gap, at a parking lot just off of Highway 7. The parking lot was packed with “birders” who were doing counts of the number of hawks, eagles, etc. We accessed the Appalachian Trail from the north end of the parking lot and traveled a short way before we crossed the road to continue the trail.

After many miles on rocky trails, this portion of the A.T. is much smoother and relatively flat. It was nice to have an easy beginning to our hike. Before long, we arrived at Crescent Rock, a beautiful overlook and a popular destination for day hikers.

It wasn’t long before we experienced what is known as the “roller coaster”. This is an area of the trail that, as you might guess, goes up and down. It wasn’t as bad as it sounds! It was near this area that I came close to stepping on a rattle snake that was right on the trail. Yikes! I screamed, more from surprise than from being scared. We later learned that the rattle snake is the official reptile of West Virginia. I would have been happy not to run into him. 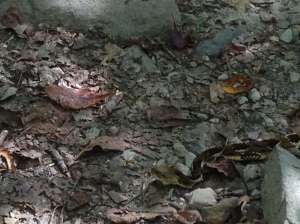 We camped overnight at Blackburn Trail Center and hiker’s hostel. The hostel is located about 8 miles from Snickers Gap, far from the main trail, WAY down a hill!  It was a beautiful facility but it was not available to us. It turns out that the Center is rented out during the off-season. That wasn’t a problem. We still had ready access to water. We pitched our tent at one of the many tent sites. We enjoyed a delicious Mountain House dinner (a real treat) and chatted with thru-hiker Steven (trail name Maximus) as well as another couple. The comeraderie on the trail is something that I really like about the A.T.

The next morning we were off for the long, 13 mile jaunt to Harper’s Ferry. The trail was relatively smooth but, boy, was it long! We stopped several times for snacks and water but Tod’s toes were definitely feeling the effect of the many miles.

The view of the river was a welcome site. Both Tod and I agreed that crossing into Harper’s Ferry from this point is really beautiful. Unfortunately, we were exhausted so the long detour from the trail to the Visitor’s Center seemed like it went on forever. The Visitor Center is well worth the trip. We purchased patches for completing the Maryland and West Virginia part of the A.T. as well as other memorabilia. Who knows what portion of the A.T. we’ll do next!