Saturday morning Karen and I got off to a late start, arriving at the Alt. 40 trailhead too late to find a parking space. We had to park nearly a mile away, in Greenbrier S.P., before proceeding with our second car to Pen Mar, PA. There we parked in a gravel lot, a short distance from the A.T. By the time we got onto the trail it was 10:30. A group of 17 members of the 4H Club had started their hike just before us. We passed them on our ascent up Quirauk Mountain, the highest peak on the A.T. in Maryland.

There really isn’t any trail up Quirauk Mountain, which is covered by large rocks and trees. What one does is climb, as best one can, from one swatch of white paint to the next. The path is, therefore, roughly laid out. Hikers are left to make their choice as to where they wish to make their climb, so long as they wind up at some approximation to the trail that reappears at the top of Quirauk. It was a relief to have this peak out of the way, but the A.T. wouldn’t let us put the rocks behind us. By the end of the day’s hike my toes were complaining loudly of the abuse.

Somewhere between the power lines and Foxville Rd., in Section 2 of the A.T. in Maryland, we ran into Clare A., the PATC ridgerunner whom we had met at Dahlgren Back Pack Campground on the A.T. nearly a month ago. She let us know that we were not to expect a running spring at Cowall Shelter, to which we were headed. That news changed our situation significantly, for it meant that we were suddenly faced with conserving our water. It meant that the four cups of water that we were carrying to rehydrate our dinner would have to be saved for drinking, and that our peanut butter and jelly sandwiches that we packed for lunch would have to be our dinner instead. 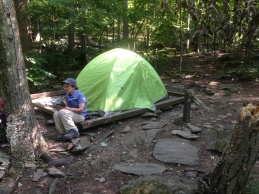 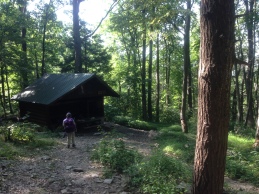 Karen and I were so exhausted by the time that we arrived at the shelter, that we hit the sack before dark. Fortunately, we arrived before the 4H group, as there were only six tent pads at Cowall. I awoke Sunday still feeling depleted of energy, having sweated out about as much water as I had taken in and having had a most unsatisfying meal the night before. We had a little cereal for breakfast and were back on the trail by 8:30.

The northern part of Section 3 of the trail was as rocky as almost the worst of what we had walked over the day before, but soon we found, interspersed with the rocks, smooth stretches over which we were able to pick up our pace, and by the time we got to Pogo Memorial Campsite we had left behind our complaints. In fact, the most popular section of the A.T. in Maryland, between Alt. 40 and Annapolis Rock, was broad and, for the most part, smooth. Over these 18.6 miles Karen and I learned again what we had first been taught by the Cedar Run–Whiteoak Canyon loop, that it would be better to carry too much water than to have to conserve. We have also decided not to bring dehydrated dinners with us except to sites where we are absolutely certain to have a replenishing supply of water.